Welcome back to Austen Promises!

I have gone back in and added a whole bunch to this story, because I felt that I was missing it in spots. I’m nearing the end of the actual writing process, so there will only be a few more of these posts. I will soon begin to post the story in its entirety at darcyandlizzy.com and start editing. Keep watching my blog for a cover reveal, too!

Did you know that for a monthly pledge of as little as $1 at Patreon, you can have early access to all my blog posts, including my Thursday ones? And, that the Thursday posts are expanded for my patrons, who get a whole chapter, sometimes more?

Just as Elizabeth stopped speaking, a noise drew Fitzwilliam’s attention behind him. Glancing over his shoulder, he saw Mary on the ground. Immediately, he turned back.

Elizabeth heard the same sound, and when Fitzwilliam turned back, so did she.

“Mary!” Picking up her skirts, Elizabeth scurried to her sister. Fitzwilliam got to her first, and as he helped Mary to her feet, Elizabeth grabbed her sister’s free arm. “Are you well? What happened?”

“I tripped on something.” Mary looked over her shoulder. “I do not know what. I suppose I should have glanced up earlier, but by the time I thought about it, I was already falling.” She brushed at her pelisse, knocking some small twigs and leaves off.

“Oh, Mary,” Elizabeth scolded. She began to brush the dirt off her sister’s clothes as she spoke. “You must watch where you walk. I would not wish to see you hurt.” The gown and pelisse as clean as Elizabeth could make them, she stood straight again, pulling her sister into a hug. “You frightened me for a second. Are you certain you are well?”

Mary hugged Elizabeth back. They did not often have these kinds of moments, and Mary was going to enjoy every second of it. “I am, I promise.” When Elizabeth let go and Fitzwilliam handed her book back to her, Mary continued, “I will be more careful in the future. I am sorry for frightening you.” She thanked Fitzwilliam for his assistance and then asked how much further they were going to walk.

“We can turn around now, if you wish, Miss Mary. Is that not correct, Elizabeth?”

“It is indeed! Would you rather we return to Longbourn, Mary?”

“Oh, no! I confess I would enjoy sitting on one of those big rocks while I read. They hold the warmth of the sun so well.”

“Then I say we carry on. Fitzwilliam, do you agree?”

With those words, the trio continued on, spending no short amount of time at the top of Oakham Mount, in conversation and private contemplation.

That afternoon, the gentlemen went about the estate and the tenant farms to survey the conditions of the fences, drainage, and so on, and the ladies, Elizabeth included, sewed, adding to the number of items she had in her trousseau. While she worked, Elizabeth pondered her betrothed, and what she knew of him. While she was determined to have him, she still longed for love and wished to know if he was someone she could, eventually, come to feel such a strong emotion for.

He was very kind to Mary today, she thought. And it was not planned. He could not have known she would trip and fall. His concern for her was genuine. She looked at Georgiana, who was diligently applying herself to her sampler, under the guidance of Miss Smith. It was the same care I have seen him give to his own sister. This speaks well of him, I think. He is respectful of his father, but I would expect that from anyone, and, despite his words yesterday morning, he has never treated my mother or sisters with anything other than gentleness and respect. As Papa said in his letter, I already know his character. If he continues on this path, perhaps I will come to love him someday. Satisfied with her conclusions, Elizabeth turned her attention back to the chatter of the other ladies.

I’d love to hear what you think! Please consider leaving me a comment! 🙂

Find me at Austen Authors     Support me at Patreon 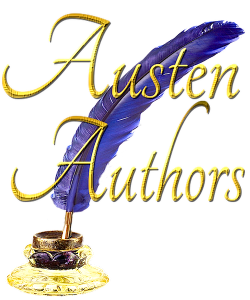 Never get lost in the Sauce

Jumblings of a Creative Wannabe

Take a New Path to Happily Ever After

The Art and Craft of Blogging

The latest news on WordPress.com and the WordPress community.